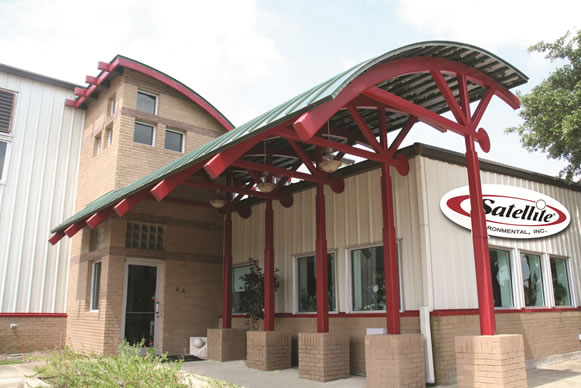 In March, 2011 Satellite purchased Hur Chemical in Cedar Park, TX and resumed the role of manufacturing Safe-T-Fresh chemicals and cleaning products. Renamed Satellite Environmental, the plant also does contract packaging and is the manufacturer and seller of Monochem products used in the recreational vehicle (RV) industry.

The name Safe-T-Fresh actually began as a product name for the first non-formaldehyde liquid ever created for the portable toilet industry in 1975. The product was so successful that it opened the door to markets in Germany and Japan, and eventually the whole world. Today, Safe-T-Fresh products are sold in over 115 countries.

In 1958, when Al Hilde started Satellite Industries, there were no chemical products on the market for application in the portable toilet industry. Very quickly, Al realized that along with fighting odours the formula needed a heavy dye and an ingredient to prevent freezing.

Al hired a company with experience in chemical manufacturing to assist in developing his first portable toilet fluid. The effort was successful and within a few short years Satellite had its own chemist, lab and equipment in place to begin manufacturing toilet blue additives and other products he felt were necessary for cleaning and freshening toilets.

As mentioned, Al saw the need for a non-formaldehyde toilet additive long before anyone else in the industry. The breakthrough occurred primarily because of his need to service Satellite’s own fleet of 20,000 toilets as safely as possible.

In 1988, Al sold his portable toilet business to Waste Management and focused entirely on selling portable toilets, chemicals and trucks to other operators around the world who had heard about his products and wanted to use them.

A change came in 1998 when Satellite outsourced the manufacturing of its products to HUR Chemical. Sales volumes had reached the point where it would have been necessary to invest in more and newer equipment and build or lease a new manufacturing facility. By teaming with HUR, those obstacles were overcome relatively easily.

Other changes began occurring in the mid 2000’s. In 2006 Safe-T-Fresh introduced Quick Scents sachets. Portion control sachets were introduced with generally good acceptance by operators. The convenience of “drop and go” toilet sachets appealed to those who felt they provided more consistency per service and less mess.

The company made another major decision in 2001 by deciding to change the name from Satellite deodorisers to Safe-T-Fresh and develop a separate sales team rather than relying solely on its Area Managers. The success of the sales team was almost immediate, with sales climbing by double digits until the US recession hit in 2008.

In March 2010 Safe-T-Fresh unveiled a new company logo and redesigned packaging. The previous logo and packaging emphasized “protection” against odours and high costs. The new logo was designed to emphasized freshness, as seen in the use of blue and green colours. Odour control was stressed by adding “Odour Control. Guaranteed!” to the tagline. While Safe-T-Fresh products have always been backed by a complete satisfaction guarantee, it was important for buyers to be aware of the commitment by placing the word guarantee, in writing, within the logo.

In 2012, Satellite Environmental completed a year long renovation based on recommendations by an industrial engineering firm who was hired to study work flow and the physical alignment of equipment and departments within the facility.

As a result, climate controlled work areas were constructed for manufacturing and R&D testing. Full departments were relocated to improve work flow and the result is increased production capacity within a temperature and humidity controlled environment designed to improve the quality and consistency of manufacturing.